Warren Buffett's mentor — and the founder of Value Investing — is misquoted frequently today, often due to recent modifications to his books.

Benjamin Graham was Warren Buffett's mentor. Buffett wrote the preface to Graham's book The Intelligent Investor, describing it as "by far the best book about investing ever written". The book was reprinted recently with commentary by Jason Zweig.

But Graham has probably been misquoted, and had his ideas misrepresented, more than anyone else in finance. Given below are some of the more prominent examples.

The so-called Benjamin Graham Formula is a classic example of a Graham misquote that was possibly caused by the recent modifications to his books. The topic has been thoroughly explored in a dedicated article.

Note: The Graham Number and NCAV are often applied incorrectly today as well. But they are more misused than misquoted.

As another example, neither of the highlighted "Graham quotes" in this recently published article by a popular financial writer are actually by Graham. 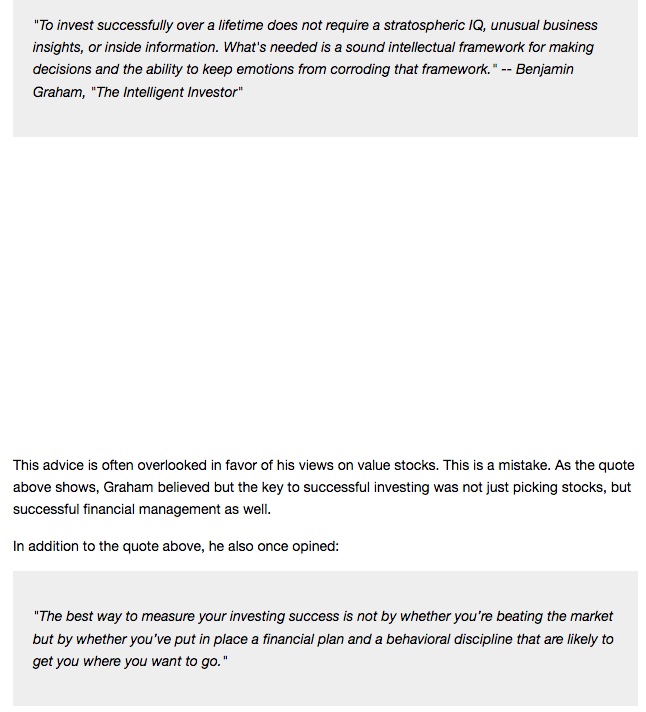 The first quote about a "sound intellectual framework" is from Buffett's preface to The Intelligent Investor, and the second one about "behavioral discipline" is from Jason Zweig's commentary.

Note: The text in the middle of the image has been removed to avoid identifying the author and the website. 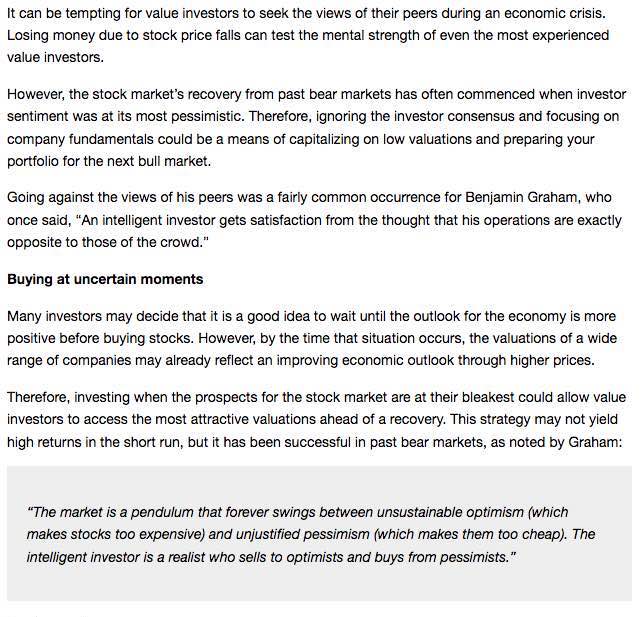 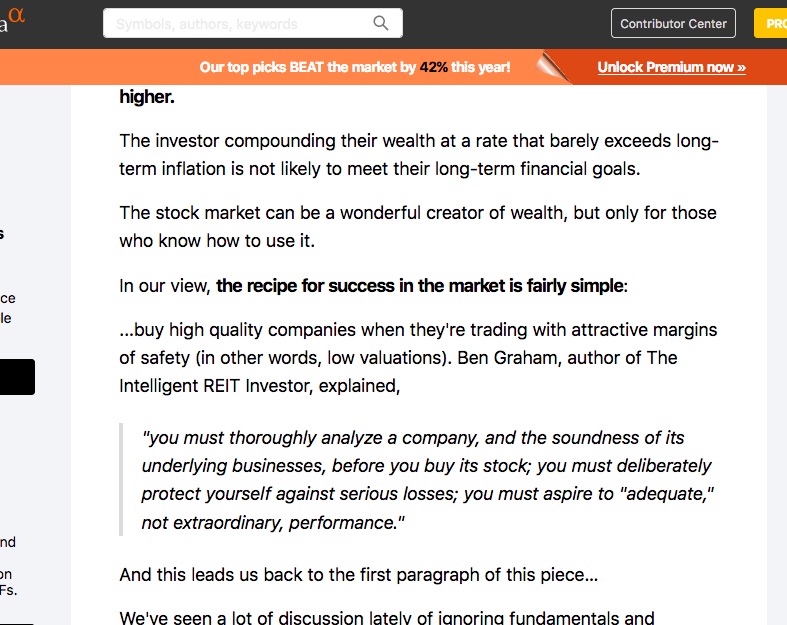 These are more examples of bits of Jason Zweig's commentary from 2006 being attributed to Graham. This is actually so common an occurrence today, that listing all such instances here is nearly impossible.

Buffett's preface is much older in comparison (1986), but everything seems fair game today in the world of online financial articles.

Another possible misquote is Graham's rumored instruction to sell a stock at "50-100% gains or after 2-3 years", which is not included in any of the sections on selling stocks in his books.

A lot of the common arguments against Value Investing arise from misunderstandings about Graham's full framework.

Detractors usually restrict themselves to the Graham Number or the NCAV method, without the supporting qualitative criteria; or use the completely misunderstood Benjamin Graham formula.

After thus starting with the wrong premises, they end up with the wrong conclusions. This is also not helped by the fact that many analysts too promote these overly simplified Value Investing methods over Graham's full framework.

Another reason people have been observed to criticize Graham's framework is because of its extreme selectivity. Graham stocks seem hard to find, or their favorite blue-chips and current holdings fail to pass the Graham rules, and so they reject the framework.

This selectivity is actually the strongest argument in favor of Graham's framework. It would seem obvious that one's stocks should fit one's framework and not the other way around. The framework of Warren Buffett's mentor — Benjamin Graham — is specifically designed to reject stocks rather than clear them

It’s always better in investing to have a false negative than a false positive. The idea is to always try and err on the side of caution. This makes finding Graham stocks harder, but also makes the process safer; ergo, provides a better Margin of Safety.

Unfortunately, such extreme selectivity also makes Graham's methods unpopular. People don't like methods that reject most of their favorite stocks.

But not all stocks failing Graham's rules are necessarily bad investments. They may fall under Special Situations. So even when stocks don't clear them, Graham's rules give a clear quantifiable measure of a stock's Margin of Safety.

Graham designed and back-tested his Value Investing framework for over 50 years, to deliver the best possible long-term results.

Financial articles online today are replete with such misquotes and misattributions that are often used to justify something completely contradictory to what the original author was trying to convey.

Many of the misconceptions and misquotes above stem from a basic lack of understanding of what science is, and how it works.

Would it be wise to trust such writers who get simple quotes and sources wrong, to get complex statistical analyses right? There is probably good reason why the role of objective numbers in investments is often downplayed today, and subjective written analyses and Story Stocks are promoted instead.

While winging it may work for churning out financial articles en masse for social platforms, actual investing requires obsessive attention to numbers.

There are Value Investing services out there charging $600 a year to compare a handful of stocks, sometimes using valuation techniques Graham actually warned against (such as the Ben Graham Formula). Even the genuine ones usually apply just the Graham Number or the NCAV, without the supporting qualitative criteria.

GrahamValue, on the other hand, is built to follow Graham's principles faithfully; in both letter and spirit.

Warren Buffett explains how, contrary to a common misconception today, Graham was uninfluenced by the Great Depression.