Benjamin Graham — also known as The Dean of Wall Street and The Father of Value Investing — was a scholar and financial analyst who mentored legendary investors such as Warren Buffett, William J. Ruane, Irving Kahn and Walter J. Schloss.

Warren Buffett once gave a talk explaining how Graham's record of creating exceptional investors (such as Buffett himself) is unquestionable, and how Graham's principles are everlasting. The talk is now called The Superinvestors of Graham-and-Doddsville.

Buffett describes Graham's book The Intelligent Investor (in its preface) as "by far the best book about investing ever written".

Graham dedicates two entire chapters of The Intelligent Investor to his stock selection framework (which he first introduced in Security Analysis).

In these chapters, Graham recommends three different categories of stocks — Defensive, Enterprising and NCAV — and seventeen qualitative and quantitative rules for identifying them.

Defensive, Enterprising and NCAV stocks can be reliably detected by today's data-mining software, and offer a great avenue for accurate automated analysis and profitable investment. The seventeen rules for these stocks ensure both a qualitative and a quantitative Margin of Safety when investing in them.

Graham specifies three different intrinsic Value calculations — the Graham Number, the Enterprising price calculation and the NCAV — in his framework, with supporting qualitative rules for each.

But the intrinsic value calculation most attributed to Graham today is called the Benjamin Graham Formula, and is usually some variation of the following:

Graham only mentions this formula briefly — in an unrelated chapter of The Intelligent Investor — to demonstrate why the market's growth expectations are rarely justified. This formula is not mentioned in the stock selection chapters, has no supporting qualitative checks, and is followed by two clear warnings.

The first is a footnote that says that this formula does not give any real intrinsic value for a stock. 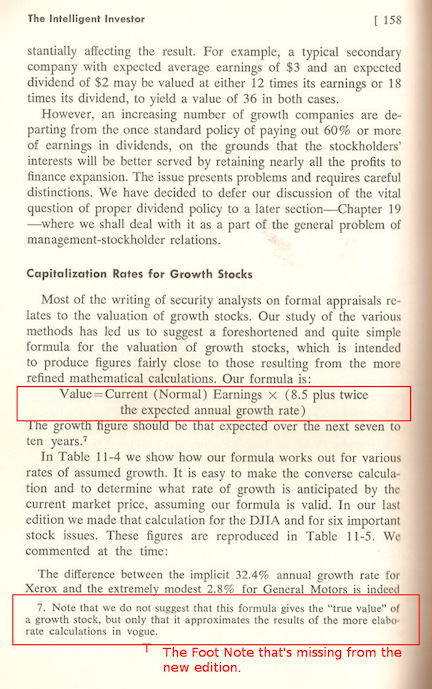 The second warning — clearly labeled as such — then says that the formula is only intended as an illustration, and that such projections of growth rates are never reliable. 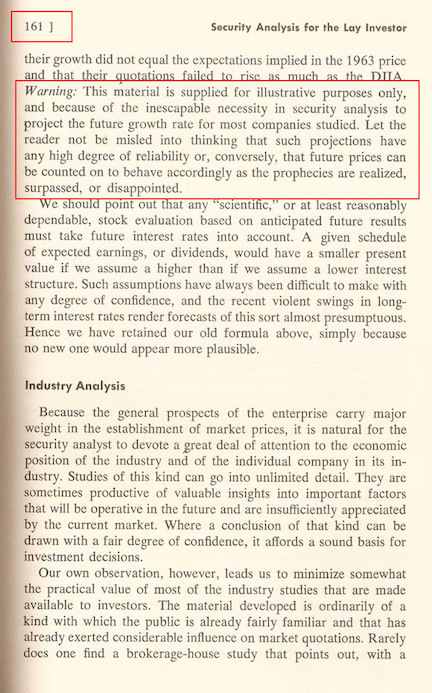 The stock selection chapters have no such warnings, and Graham clearly recommends the more comprehensive framework described in them.

How The Misunderstanding Started

What seems to have started the misunderstanding is that the most commonly available edition of the book today is not the one originally written by Graham, but the new one with commentary by Jason Zweig. 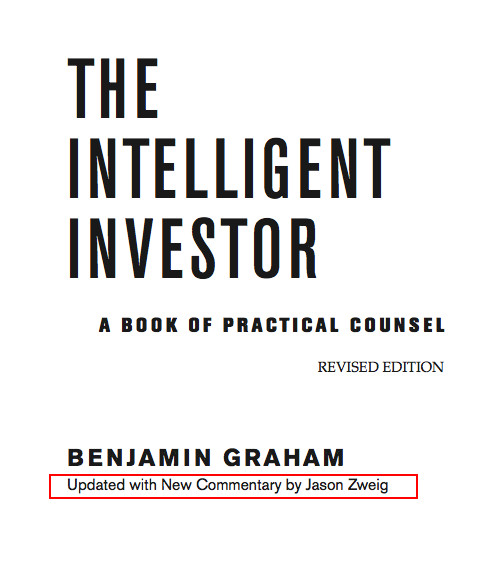 In this edition, all the Foot Notes from the original book have been moved to the end of the book (Endnotes) to make place for Zweig's commentary.

For example, if we look at the page with the formula in the new edition, we see that the footnote — where Graham cautions against using this formula for intrinsic values — is now missing. 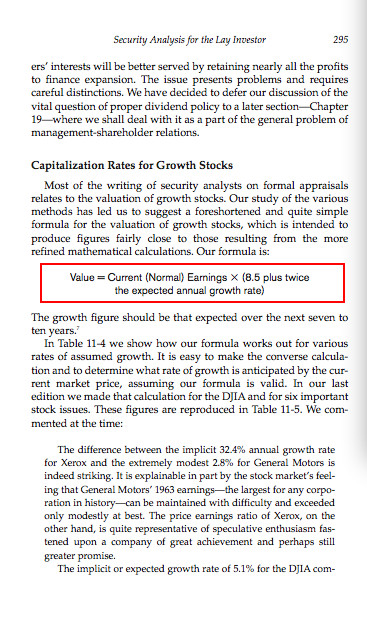 In the new edition, the footnote is now at the end of the book — on Page 585 — where no one is likely to see it. 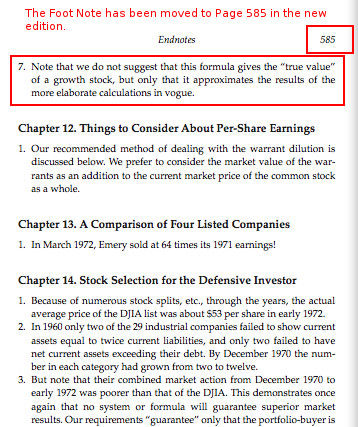 This missing footnote is probably what has led to current misunderstandings about the formula. The full warning (second scan above) is only given a couple of pages later, and is easy to miss.

The formula discussed above is the one that was actually published by Graham.

This update is simply a passing reference that Graham supposedly made in a later interview, of how one might account for interest rates. All the warnings that were given with the original formula would apply here too.

In fact, Graham expresses several misgivings with the updated version as well in the said interview (The Decade 1965-1974: Its significance for Financial Analysts).

Graham wrote extensively about the unreliability of forecasts in finance. So the term "Expected Growth Rate" should ring alarm bells for any true student of Graham.

In fact, in the same chapter in which this formula is mentioned, Graham also writes the following about earnings forecasts.

"It appears to be almost impossible to distinguish in advance between those individual forecasts which can be relied upon and those which are subject to a large chance of error."

Buffett too scoffs at the idea of making investment decisions based on earnings forecasts and projections.

"If you have a business that fits the following criteria, call me or, preferably, write... (2) demonstrated consistent earning power (future projections are of little interest to us, nor are "turnaround" situations)."

Graham's actual framework only uses objective figures from the past — including checks for past growth rates — and requires no assumptions about the future.

But this formula uncharacteristically requires an "expected annual growth rate" — a subjective assumption — to arrive at an intrinsic value.

If we look at how this formula is actually used in the book (or in the scans given here), Graham uses this formula to calculate growth rates expected in the past — from past stock prices — and demonstrates how such expectations of growth are rarely justified.

Every set of rules in Graham's real framework also includes a check for assets. This formula has no such checks.

For example, the Graham Number — the price calculation for Defensive quality stocks — is calculated as:

Services and other asset-light companies were common in Graham's time. In a calculation such as the above, lower assets can be offset by higher earnings and vice versa.

Graham designed a comprehensive, well-balanced framework that could assess all types of companies.

On the other hand, the V = EPS x (8.5 + 2g) formula is only useful for studying past misjudgments of growth expectations by the market. It cannot be used to calculate present intrinsic values, or to predict future growth rates.

Note: The 11th factor in Walter Schloss' 16 Factors too advises investors to buy assets at a discount rather than buy earnings.

There are those who will continue to recommend stocks using variations of the V = EPS x (8.5 + 2g) formula. They will defend it by saying that valuation is an art, that an intrinsic value is only an estimate, and that such warnings apply to all methods of valuation.

But while our view of reality may not be perfect, those of us with more clarity tend to make slightly better decisions; and success in investing depends on our ability to make fewer mistakes (maintain a Margin of Safety), and to make better decisions based on hard facts.

The facts about Graham's methods are all laid out in plain view above. When having to decide between the methods Graham recommended and the methods he warned against, it may help to remember Buffett's Keep It Simple principle. The simple fact is that Graham only made a passing reference to this particular formula — with two warnings — while dedicating two whole chapters to his actual stock selection framework.

A popular Intrinsic Value calculation that's actually in that framework, is the Graham Number.

At the 1995 Berkshire Hathaway Annual Shareholder Meeting, Warren Buffett and Charlie Munger describe Financial Projections as "Fatuous" and "Total Nonsense"; and say that they deliberately avoid looking at them.

The Formula and Footnote

The Warning about the Formula

The Formula and Missing Footnote