Philip L. Carret — the man Warren Buffett called "The Hero of Investing" — had some very prescient instructions for the modern Value Investor in his 1930 book, The Art Of Speculation.

At Berkshire Hathaway's 1996 Annual Shareholders' Meeting, Warren Buffett referred to the then 99 year old Philip Carret as "The Hero of Investing". Carret is the author of The Art Of Speculation, a series of articles written in the 1920s — nearly a century ago — which were then published in book form in 1930.

In the book, Carret gave what he called the Twelve Commandments for Speculators or the Twelve precepts for the speculative investor; many of which could be considered precursors to modern formalized Value Investing principles. This was a few years before Benjamin Graham published his books, which gave clear demarcations between investors and speculators.

(1) Never hold fewer than ten different securities covering five different fields of business.
(2) At least once in six months [sic] reappraise every security held.
(3) Keep at least half the total fund in income producing securities.
(4) Consider yield the least important factor in analyzing any stock.
(5) Be quick to take losses, reluctant to take profits.
(6) Never put more than 25% of a given fund into securities about which detailed information is not readily and regularly available.
(7) Avoid "inside information" as you would the plague.
(8) Seek facts diligently, advice never.
(9) Ignore mechanical formulas for valuing securities.
(10) When stocks are high, money rates rising, business prosperous, at least half a given fund should be placed in short-term bonds.
(11) Borrow money sparingly and only when stocks are low, money rates low or falling, and business depressed.
(12) Set aside a moderate proportion of available funds for the purchase of long-term options on stocks of promising companies whenever available. 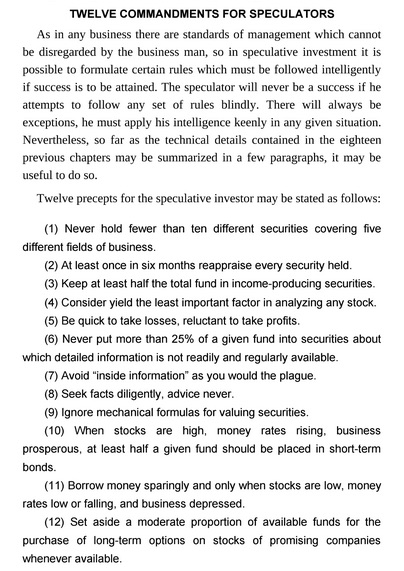 Carret's precepts #1 and #6 above are closely aligned with what Graham recommended on position sizing. Precepts #3 and #10 are similar to Graham's instructions on capital distribution across equity and debt.

Read the Five Principles by Jack Bogle and the Sixteen Factors by Walter Schloss.

In the 2018 Balance of Power interview for Bloomberg Markets, Warren Buffett says yet again:

"The principles [of investing] haven't changed at all... It's exactly what Ben Graham wrote in 1949."