Who Was Benjamin Graham? 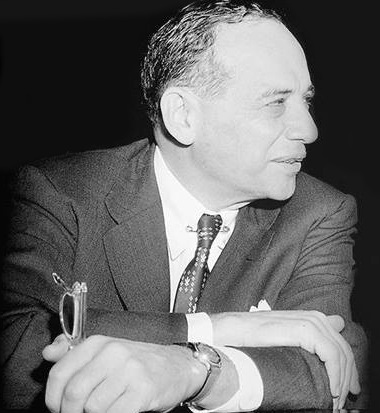 Benjamin Graham is the only investment guru you really need to know.

Benjamin Graham (May 9, 1894 – September 21, 1976) was a British-born American investor and professor. Graduating from Columbia University at age 20, he started his career on Wall Street and eventually founded the Graham-Newman Partnership. He also held an adjunct teaching position at Columbia University. Graham passed away in 1976 at the age of 82.

Buffett studied under Graham in Columbia Business School, and has described Graham as the second most influential person in his life after his own father. Buffett even named his son — Howard Graham Buffett — after Graham.

In 1984, Buffett gave a talk at Columbia Business School describing how Graham's record of creating exceptional investors (such as himself) is unquestionable; and how Graham's principles are everlasting. The talk is known today as The Superinvestors of Graham-and-Doddsville.

A transcript of the talk is available as an appendix in all editions of Graham's book — The Intelligent Investor — that have been published since 1986.

Irving Kahn, one of Graham's earliest students, also went on to become the oldest active money manager on Wall Street. Like Buffett, Kahn too named his son — Thomas Graham Kahn— after Graham.

In a 2012 article for Bloomberg Business titled How to Play the Market, Kahn wrote: 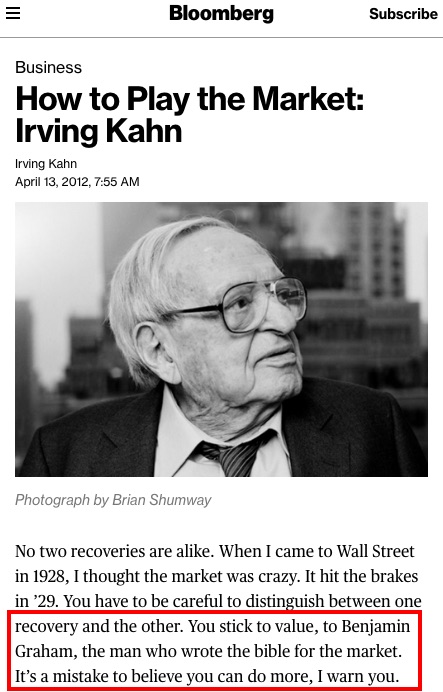 Other well-known students of Graham include:

"I took Ben’s course in Advanced Security Analysis at the New York Stock Exchange Institute (New York Institute of Finance)... Many bright Wall Streeters such as Gus Levy of Goldman Sachs, who later became the top arbitrageur in the country, used to take his course. I often wondered how much money people made on Ben’s ideas by transforming them into investments."

"Heed the words of the great pioneer of stock analysis Benjamin Graham: 'Buy when most people...including experts...are pessimistic, and sell when they are actively optimistic'."

"[Graham] is the genius who literally created the framework for investment analysis that leads to successful investing. Like that other genius Edison, Graham created light where there was none."

Many contemporary value investors — such as Seth Klarman and Bill Ackman — too claim to have been strongly influenced by Graham's principles of investing.

The newer and more concise of Graham's investment texts, The Intelligent Investor was last written by Graham himself in 1973 and published as the 4th Revised edition. This edition was reprinted in 1986; with a preface by Warren Buffett, and with the transcript of Buffett's 1984 talk The Superinvestors of Graham-and-Doddsville as an appendix.

Buffett writes in the preface that "more than any other man except my father, [Graham] influenced my life", while describing The Intelligent Investor itself as "by far the best book about investing ever written".

"To invest successfully over a lifetime does not require a stratospheric IQ, unusual business insights, or inside information. What’s needed is a sound intellectual framework for making decisions and the ability to keep emotions from corroding that framework. This book precisely and clearly prescribes the proper framework."

In his Foreword to the 2005 reprint of the original 1949 edition of The Intelligent Investor, John Bogle writes: 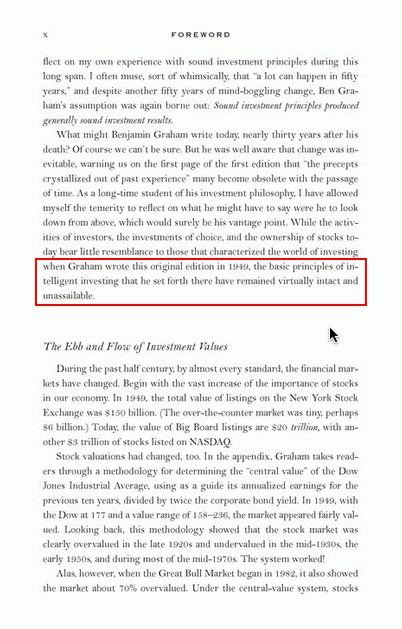 The earlier and more voluminous of Graham's books, Security Analysis was co-authored with Graham's student David Dodd. Security Analysis served as the introduction and foundation to what would eventually come to be known as Value Investing.

Security Analysis was last reprinted in 2008, with a foreword by Warren Buffett and a preface by Seth Klarman. Given below are excerpts from both. 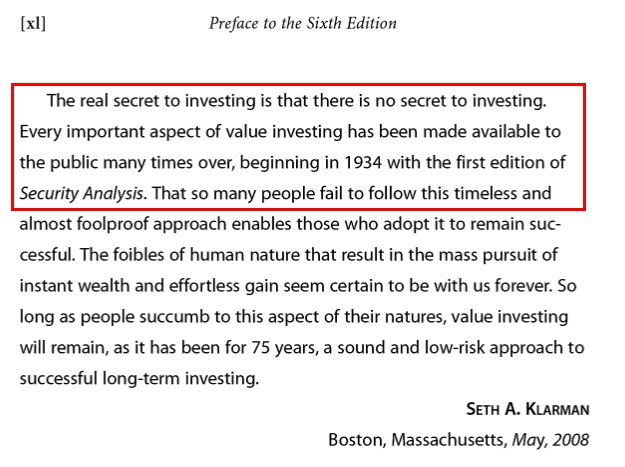 Graham's legacy in the investing world is almost impossible to overstate. In addition to mentoring — and later inspiring — generations of investors, Graham has been credited with single-handedly creating the field of security analysis and bringing structure to the activity of investing.

Graham was also one of the first to point out that the market indices often beat actively-managed funds. This paved the way for the eventual creation of Index Funds, which would provide retail investors with more freedom and accountability in their investments than ever before.

So perhaps it would be best to end with Buffett's own conclusion to The Superinvestors of Graham-and-Doddsville:

"Ships will sail around the world but the Flat Earth Society will flourish. There will continue to be wide discrepancies between price and value in the marketplace, and those who read their Graham & Dodd will continue to prosper."

In the 2018 Balance of Power interview for Bloomberg Markets, Buffett was quoted again as saying that the principles of sound investment have not changed at all since his mentor first defined them.

"The principles haven't changed at all... It's exactly what Ben Graham wrote in 1949."

Lauren Templeton, great niece of Sir John Templeton, talks at Google in 2017 about Sir John being Graham's Student and the Templeton maxim "To buy when others are despondently selling...".

Seth Klarman, chief executive of the Baupost Group, talks about Graham's influence on him; in a 2011 interview with Charlie Rose.

The complete playlist of videos is given below.